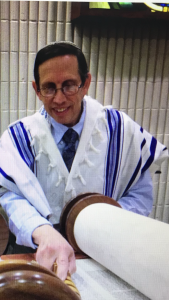 Rabbi Rubin joined Temple Beth Or in August 2011 as its spiritual leader.  He believes that a synagogue is a very special place in which many different activities happen that reflect the diversity of the people and the various classical roles a synagogue can fill as a House of Prayer (Beit T’fillah), House of Study (Beit Midrash) and House of Gathering (Beit K’nesset).  He feels that a congregation should also be a friendly, welcoming place and the anchor of a caring community which reaches out to its members relating to their needs and interests and to the larger Jewish and general community through social action projects. He feels that is important to reach out to, involve and work with persons of all ages in the congregation, from preschoolers and their families to senior adults (and everyone in between).

Rabbi Rubin has recently served congregations in Pennsylvania (Adath Israel, Merion Station and Congregation Beth T’fillah, Philadelphia) and previously in New Jersey (Temple Mekor Chayim, Linden and Congregation Agudath Israel, Caldwell). He has also been a Jewish community healthcare chaplain and a coordinator of kosher supervision. Through his congregational work and chaplaincy service, Rabbi Rubin has been involved in many interfaith activities and dialogue sessions.

Rabbi Rubin was born in Chicago.  While in college, he became involved in Hillel, Student Struggle for Soviet Jewry and Judaic studies courses. While in rabbinical school, he served as a counselor at Camp Ramah, Wisconsin. He has traveled to and studied in Israel at various times, including the leading of congregational trips.

Rabbi Rubin is married to Susan.

Rabbi Rubin may be e-mailed at: RBobRubin@gmail.com.