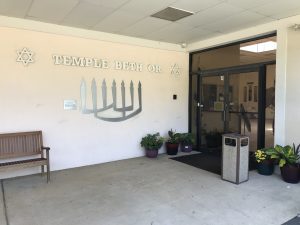 The history of Temple Beth Or goes back long before the opening of the Van Zile Road buildings. In 1951, the first meeting of a group of Jewish women living in the Shore area was held in Manasquan. After the “get acquainted” meeting these women decided to meet again at the Veterans of Foreign Wars building in Manasquan to create a structured club with a charter and officers. These 44 women then began meeting at the Point Pleasant American Legion Hall on a regular basis. It was these women of the Shore area that started the movement for Jewish families to have a place to be together with other families of similar religious and familial interests.

In 1954 the Hebrew school was formed with a few boys to be Bar Mitzvah (girls were not yet recognized for Bat Mitzvah). A lay teacher prepared the boys for Bar Mitzvah. By 1959 there were 33 children who were eligible to attend Hebrew School.

In 1958 a group of Jewish men from Point Pleasant and neighboring Shore towns formed the first Men’s Club to work along with the now named Shore Jewish Women’s Club.

Three years later, in 1961, the Shore Jewish Women’s Club, with the help of the Men’s Club, was instrumental in establishing a congregation called Temple Beth Or. In 1965 the “old building” was purchased and moved from Fort Monmouth to our current site thanks to the facilitation of the First President of Temple Beth Or, Ed Weiner. High Holiday services were held in the newly opened building. One year later the Temple purchased its own Torah. Services were led by various lay members and visiting student rabbis. In August, 1968 Rabbi Perlman became the spiritual leader of Temple Beth Or. In 1976 Rabbi Dr. Robert E. Fierstien and his new wife Ruth joined our congregation as our religious leader following Rabbi Perlman’s retirement.

In 1977 ground was broken and the start of the building we now call our religious home began. In 1978 the building we have cherished for 40 years was dedicated and opened for High Holiday services.

Rabbi Fierstien retired in 2008 and became our Rabbi Emeritus.  Rabbi Royi Shaffin served as rabbi from 2008-2011.  He was followed by Rabbi Robert Rubin in 2011 who has served Temple Beth Or since then.

Throughout the years there have been many times of challenge only to be met by a group of people who literally did whatever was necessary.  They dug up sewer lines for repair, climbed roofs and brought babies to organizing events in order to continue providing not only for the Temple Beth Or community but the Shore Jewish community as well. These were the founders of Temple Beth Or. May we, all the members of Temple Beth Or, live in peace with all our neighbors, no matter their religious beliefs, for all time.